There's been lots of paper work and two IEP's to attend so I have not been able to author posts like I really want to. I have photos of somethings I have been adapting for use with my kids. Some of these I make and others I "make into." hee hee!


I have a toy tester at my home school where my little "office" is . After he has done his work he searches my shelves for toys. When he approves then it's good. You'll see him in a photo "toy testing." I used one where his face is not really clear so you won't go looking for him on Main Street. {:^D}

I found this learning mat in a Dollar General for only $15. Here's a photo of the box which shows how it's used. There are some adhesive rubber disks in the package but the directions don't say what they're for. Anyway the surface of the toy is smooth so I am trying some 3D paint on key areas for the blind. 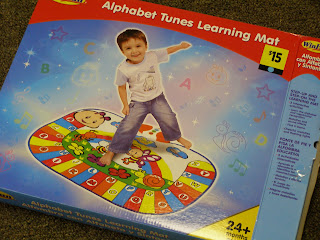 This is what the toy looks like out of the bag. if you look close up, I have painted raised lines around the colored letters and panels. I'm leaving it there on the floor over the weekend to dry. Knowing my "Toy Tester" he will probably try to peel all of it off the first time he tries to play with it if it doesn't feel right. My braille writer is on the blink so I can't stick braille letters and colors on the spots right now. We get leftover braille writers when we work with the multi-disabled kids. But that's a soap box for another time. Don't get me started! 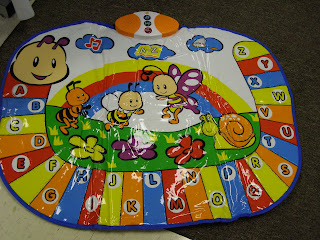 This is the 3D paint by the company that makes Elmer's glue. 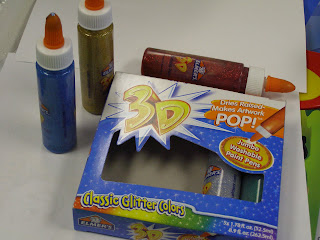 This is a leap frog toy called "Fridge Farm Animal Magnets." I paid only $5 for it at a garage sale. It plays music and has a couple of sound effect puzzle games. One game involves matching the animal halves and another involves mixing them up to make silly combinations. I thought I'd braille the animal parts but my toy tester showed me I don't need it. He has already memorized what the pig feels like and loves to make a "pig-duck" to hear the silly song about a pig-duck. 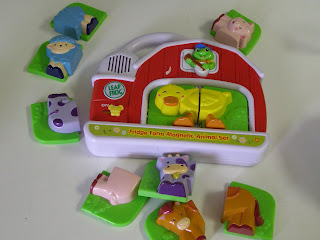 I couldn't afford a big playground ball but Mr. Toy Tester has shown me that he likes this garage sale exercise ball. He can hear it when it bounces away because the bouncing sound from it echoes. It's tough enough for sitting on. Mr.Toy Tester likes to dribble this one, too. The only thing I don't like about it is it's color. I wish there was some way I could color it some bright fluorescent color. I had a student some years ago who could track a big orange playground ball against the green grass using some light perception. 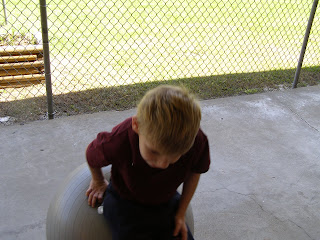 This is an old poster I made maybe 10 years ago on fluorescent orange poster board to make my point to folks who had my low vision kids in their classes. 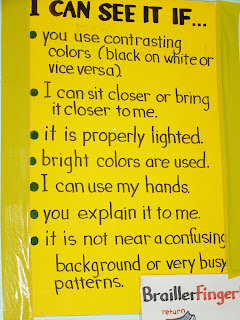 I made my own dry-erase board by gluing some bulletin board boarder around a ghost line poster. I laminated it and stuck it on a wooden bulletin board. 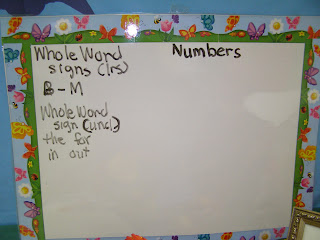 I had a toy phone that Toy Tester loved to borrow so I got this one for his birthday. I found it in Wal-Mart. It also plays music, has voices and teaches emergency numbers and home phone numbers. I stuck these braille numbers on it but they fell off in a day or so. He let me know they are not needed because he's already memorized where all the numbers and function buttons are located. He says he uses it to call girlfriends. 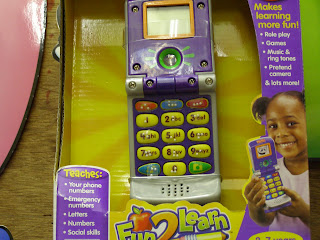 Email ThisBlogThis!Share to TwitterShare to FacebookShare to Pinterest
Labels: adaptations for the blind, adventures, toys, toys for blind children