A Different Shade of Black II

I've posted this here for my students with albinism:
http://www.youtube.com/watch?v=vcOIEVFo0Mo
Posted by Ms. Kathy at 10:05 AM No comments:

Albinism: Caught Between Dark and Light

Counting to Five with the Students in SP (part 2)

I have four students in Mrs. East's class for children with severe and profound developmental disabilities. Two of them have only light perception and two are cortically visually impaired (CVI).

Mrs. East's learning task this year concentrates on counting to five. She wants the children who can talk to try to say the numbers and the children who can use their hands to be able to "tap count" on the table while she counts aloud. She also wants them exposed to the numeral. Earlier I made double vision flash cards with the numbers 1 to five in large print, braille, raised lines. I used neon colors because of the cortical blindness. 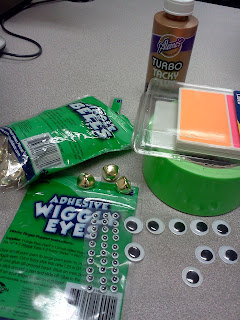 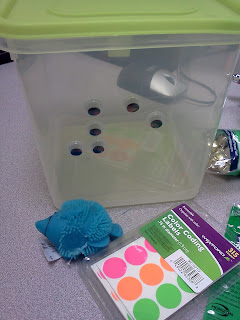 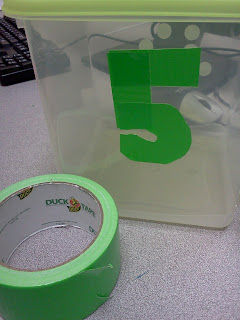 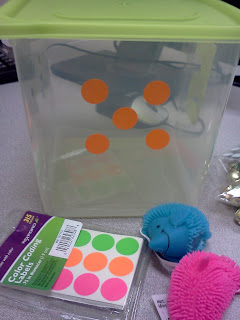 My intent here is to make a counting box in which the children will be able to drop five objects inside and hear them hit the bottom of box. I wanted to use a coffee can because they make the most noise but I became concerned with using spray paint to cover the writing on the can. Instead I found more jingle bells and some inexpensive food storage containers. I am thinking I will sew each bell into a cloth pocket so they will be easier to pick up and hold and pose less of a choking hazard.

On each side of the container is the number five represented in different ways. I used neon green duct tape to make a print numeral five on one side. Doll crafting wiggle eyes  were used on another side to make a large braille numeral five. On another side I used five neon orange labeling dots.

I also found some more of those little light-up squishy toys that can be used for another class.

Later, I will post how the jingle bells came out.

I have been trying to work on a Classroom Suites activity that is conducive to switch use and a video to paste on TeacherTube, however, with no desk I have to go to another site, at the AT department, where the program is installed to do that. Lately when I get to go there it's to use their computers for paper work. I'm determined to  complete a CRS activity before February.

Club for DeafBlind to Start Up


Kathy stopped by Essex County Standard website and suggested that you visit the following URL:
http://www.essexcountystandard.co.uk/news/localnews/10075200.Heybridge__Deafblind_club_to_start_up/?ref=erec
They added:

These are some great guidelines to remember for the classroom as well. I'm printing a few here and the rest can be found at the link provided above. For some of my babies with learning disabilities who are in resource or special classes I suggest using Comic Sans font as it's like the teacher's handwriting. ~K


J. Elaine Kitchel
Low Vision Project Leader
American Printing House for the Blind
The American Printing House for the Blind (APH) believes guidelines for print documents should be brought to a standard of optimal usability for persons with low vision. The standards should be based on fundamental principles gleaned from research that originated from the study of the impact of print characteristics on readers of print products. This research also includes existing industry standards, where they apply.
With the advent of word processing, document design has become an intrinsic part of writing. Writers for APH encounter a wide array of new printing options. The knowledgeable use of these options helps the writer gain an advantage because readers of APH materials have become accustomed to very well-designed documents. For the writer of documents at APH, it has become an imperative to be knowledgeable about typography and design.
It is impossible to teach the writer everything he/she should know in a brief primer, but here are the essentials:


A. Use a Readable Typeface/Font

For text, a readable typeface means a sans-serif (/san-ser-if/) typeface (or font) made up of mainly straight lines. A serif is a short stroke that projects from the ends of the main strokes that make up a character. These are not desirable for use in a book to be read by persons of all ages and/or persons with visual impairments.
Although serif typefaces often work well in headings and personal stationery, they can be difficult to read in continuous text. Among the better san-serifed typefaces are APHont, Antique Olive, Tahoma, Verdana, and Helvetica.
The minimum size of any typeface to be used on APH documents is 12 points. Most large
print is 18 points.
Here are the primary things to think about when selecting a font for use by persons with low vision:


B. Use White Space

Ample white space makes a page more readable and useful because it provides contrast to the print and creates luminance around the text. The primary ways to create white space on the page are to use generous margins, e.g., margins of at least one inch for letters and other business documents. Another way to provide white space is to provide ample spacing, leading and kerning to text.
APH encourages its writers to:
Other ways include white space are, supply headings and sub-headings, enumerate items in separate paragraphs, subparagraphs, or bulleted lists.
White space is especially important on forms. Lots of horizontal lines, or grids with horizontal and vertical lines can be very difficult for some people with visual impairments to follow across the page. These difficulties can be minimized through the use of pastel, colored background for every alternate line. Example below:
Crowded text detracts from readability and usability because contrast is limited by too much black text. In studies, persons with normal vision who filled-out crowded forms often lost focus before they reached the end of the task. Persons with vision impairments struggled more than their typically-sighted peers with forms and text.

I found this delightful web site for teachers and home schoolers. It's full of free activities and methods for teaching first graders. There are cute crafts there.
Check out these sound cards--just great for our large print readers.
http://www.firstgradefrenzy.com/2011/11/sound-chart-posters-oh-me-oh-my-part-two/